Virtual Paintout 10: Vevie Goes to the Isle of Wight!

This month the Virtual Paintout  gang took off for the Isle of Wight. Being a geographical ignoramus, I had to look closely at the map. You never know where in the world our leader, Bill Guffey  is going to take us next!

The Isle of Wight is the largest island of England, in the English Channel. It has a fascinating history, being mentioned as far back as the Roman Empire. At various time throughout history, everybody and his brother attacked it if they sailed down the English Channel. In more recent times, it was a favorite vacation spot for the "rich and famous", from the likes of Charles Dickens to Queen Victoria and Prince Albert. 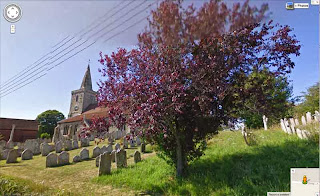 And what a gorgeous island! Vevie did a lot of prowling (via Google Street View) before she settled on this old stone church and graveyard, in the town of Brading on the East end of the island. Having nine lives, she has a special affinity for graveyards.

To Vevie, graveyards are not morbid. Rather, they remind her of the gift of Time. A place of rest and reflection. That each day is to be cherished, and lived to the full.

A favorite quote of mine comes from the 1994 movie "Star Trek: Generations". Captain Jean Luc Picard is talking to Wil Riker, his Number One officer:

"Someone once told me that time is a predator that stalked us all our lives. But I rather believe that time is a companion who goes with us on the journey that reminds us to cherish every moment because they'll never come again. What we leave behind is not as important as how we live it. After all, Number One, we're only mortal."

And now the "making of" photos. (can click on any pics to enlarge)

Here is my cropped version of the scene:

After playing around in Photoshop with various color schemes, I settled on this one. Though in the end, I toned down the orange: 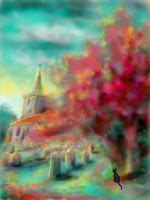 I like to pick out my tubes of paint for my current color palette, and then put all the rest away. For this painting, I used a few more than usual. They are Interactive Acrylics by Chroma: Pthalo Turquoise, Chromium Green Oxide, Quinacridone Magenta, Permanent Alizarine, Brilliant Magenta, Vermillion, Cadmium Yellow Deep, Dioxazine Purple, Titanium White, and Paynes Gray. (whew!)

After giving the canvas a coat of gesso, I decided to again play with texture. So I took my palette knife and added some "rocky" foreground texture for the stone wall and some grasses, using white texture medium. Then drew in my design with a Derwent Inktense pencil, in Madder Brown, softening it with water:

Decided to add some values with Burnt Umber this time. I used to do very detailed grisaille underpaintings, and I guess I was missing that, so did a quicky version, only using browns instead of grays. Ha ha, so really it's not a grisaille, but rather a brunaille. ;-) 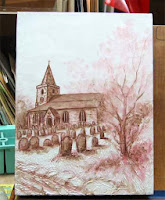 I started in with my dominant color, turquoise. I mean, ALL OVER. It was exhilarating! 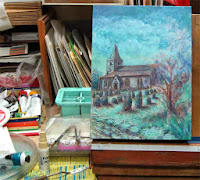 Adding in the focal color for the tree, shades of plum, red, purple, etc. 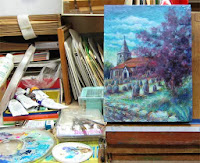 All done! Vevie was added, the sky brightened, and the "spice" colors added (yellows, oranges and pinks): 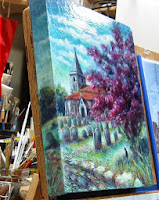 Drying on the easel; the texture throws off a lot of reflections: 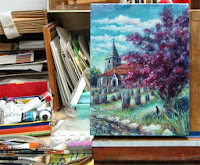 Some close up details: 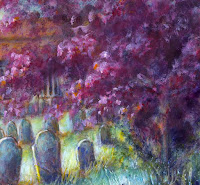 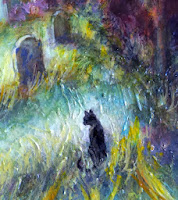 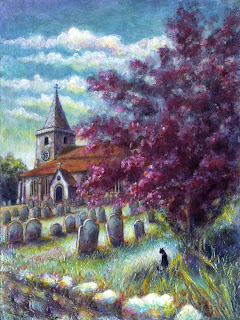 Years ago, I wrote the following in my journal.
I don't feel as though I've yet learned to live up to it... but I do try:

"I will live this day to it's fullest.
Time is the coin of my life,
and I choose to spend it wisely." 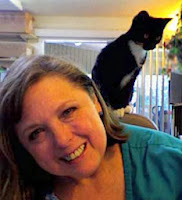